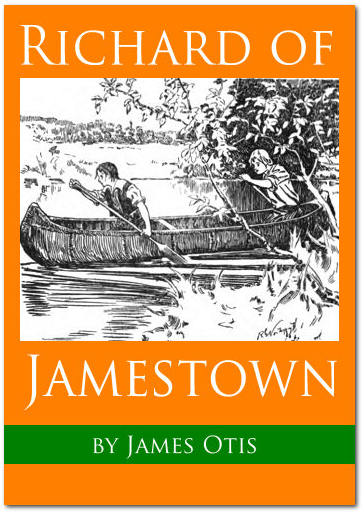 Richard of Jamestown by James Otis (PDF ebook) – A wonderful, highly readable chapter book by James Otis, chronicling the adventures of Richard, a young boy who sails to the new world with the colonists who founded Jamestown. His stories of the hardships and adventures faced by the Jamestown settlers, told from the viewpoint of a young boy, make this great reading for the Fall season. Don’t miss this!

The purpose of this series of stories is to show the children, and even those who have already taken up the study of history, the home life of the colonists with whom they meet in their books. To this end every effort has been made to avoid anything savoring of romance, and to deal only with facts, so far as that is possible, while describing the daily life of those people who conquered the wilderness whether for conscience sake or for gain.

That the stories may appeal more directly to the children, they are told from the viewpoint of a child, and purport to have been related by a child. Should any criticism be made regarding the seeming neglect to mention important historical facts, the answer would be that these books are not sent out as histories—although it is believed that they will awaken a desire to learn more of the building of the nation—and only such incidents as would be particularly noted by a child are used.

Surely it is entertaining as well as instructive for young people to read of the toil and privations in the homes of those who came into a new world to build up a country for themselves, and such homely facts are not to be found in the real histories of our land.