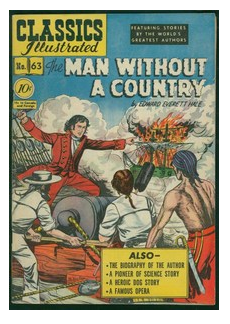 There are few tales charged with stronger patriotism than breathes from this narrative of a man who “loved his country as no other man has loved her; but no man deserved less at her hands.” — Henry Seidel Canby

“The Man Without A Country” is Edward Everett Hale’s haunting and patriotic tale of Philip Nolan, a young man enamored of the charismatic Aaron Burr. He participates in Burr’s mystery shrouded empire building scheme, for which Burr was charged with treason. But while Burr and the other leaders escape punishment, Nolan is convicted. When the presiding judge offers him an opportunity to prove his loyalty to the United States, Nolan replies in fury: “D—n the United States! I wish I may never hear of the United States again!”

This is a powerful and poignant tale — the ultimate “think before you speak” story — that you will long remember.

To listen to this 30 minute MP3 audio dramatization of this classic living book, CLICK HERE.

PROGRAM NOTE! Parents, we’re telling you this upfront, because we don’t want any emails fussing at us: Be aware that the protagonist of this story at one point does indeed yell out “D**n the United States!” This is a crucial turning point in the story, portrayed exactly as written in the original book. It is not done for sensationalistic reasons — it is a vital part of the story being told.  We could have spliced this out of the story, but it is a key point in the plot and the original book, so we have allowed it to remain. Obviously in 1954 the producers of this program – made specifically for family listening – felt the same way. If this is not acceptable to you, PLEASE DON’T DOWNLOAD THIS STORY!